​Manchester City progressed to the fifth round of the FA Cup on Sunday afternoon, with a comfortable 4-0 win over 10-man Fulham.

The hosts took the lead inside the opening five minutes, when Tim Ream brought down Gabriel Jesus in the penalty area, and subsequently received his marching orders. Ilkay Gundogan dispatched the spot-kick, and Man City never looked back. Bernardo Silva doubled the advantage just before the 20 minute-mark, twisting and turning on the edge of the box before unleashing a vicious left-footed drive into the bottom corner. The Citizens worked hard to extend their lead, and Jesus added a third in the second half, and then doubled his tally a couple of minutes later to provide a gloss to the scoreline.

Man City saw out the rest of the game with ease, confirming that their name is in the hat for the next round of the FA Cup.

Very much a 'business as usual' display from ​Manchester City on Sunday afternoon. Guardiola sent out a strong side, while allowing valuable game-time for youngsters such as Phil Foden and Eric Garcia. The early red card changed the entire complexity of the match, but the Citizens were professional and respectful of their opposition from the off. 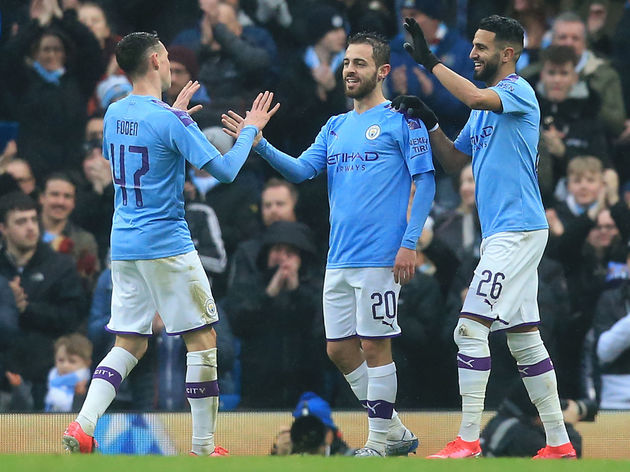 When Man City are in full flow, they truly are a joy to watch, and they carved out countless opportunities which they mercifully squandered. The midfield pressed the life out of Fulham, who struggled to string any passes together against their relentless opponents. Guardiola will have found this exercise very useful in evaluating his fringe players, and providing starlet Foden with a decent test against a dogged opposition. The 25-year-old is such a unique player, and he is capable of putting in the graft of two midfielders, while still having the energy and guile to create sensational goalscoring opportunities for his teammates. There are not many players in the world who are as well-rounded as Silva, and he will be hoping to earn a more regular place in the Man City team for the rest of the season.

"Alright lads, these guys are good, so let's keep it tight for the first ten minutes - and no stupid mistakes!" Scott Parker's team-talk went out of the window on six minutes however, as Tim Ream hauled down Gabriel Jesus when in on goal, and the referee had no other option than to award a penalty and dismiss the Fulham captain. It was an absolute nightmare start for the visitors, who then faced the daunting task of playing 85 minutes a goal down, with ten men against the Premier League champions. Parker's side applied themselves dutifully over the course of the match, but the result was never in doubt.

A tough afternoon for ​Fulham, against one of the most gruelling opponents in Europe.

Josh Onomah has struggled to find the right environment to grow in recent years, but he certainly looked like a confident young man against Man City on Sunday afternoon. The 22-year-old joined Fulham on a permanent transfer in the summer, and he will be desperate to prove he has what it takes at the highest level. Onomah equipped himself well against the Premier League champions, and his ability to carry and hang on to the ball gave his defenders some valuable respite from the never-ending waves of Man City attacks. The midfielder also tried to stamp his mark on the game in the Citizens' half, but it was always going to be an uphill struggle for anyone to penetrate that defence.

A brave performance in difficult circumstances.

Man City follow up their FA Cup endeavours with a second leg tie of the EFL Cup semi-final clash against rivals ​Manchester United in midweek.

Fulham return to Championship duties on Saturday afternoon, where they will host strugglers Huddersfield at Craven Cottage.