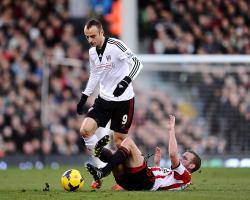 Fulham's Dutch boss was furious with his chief attacking protagonists for wasting three gilt-edged chances in Saturday's 4-1 Craven Cottage thrashing at the hands of Sunderland.

Berbatov had scored in his previous three league outings for Fulham, either side of a groin strain, but the big Bulgaria striker was off the pace against the Black Cats.

Gus Poyet's side did a number on Taarabt too, Lee Cattermole shackling the former QPR playmaker, nullifying his threat and stifling Fulham's midfield.

Frustrated Meulensteen admitted Fulham can ill afford the profligacy that saw Berbatov spurn two clear chances in the first 10 minutes, and Taarabt another in the first half.

"We have kept reminding ourselves 'don't think you've turned the corner' just because of a couple of positive results," he said.

"And here we are: one win can jump you to 13th and that's why you have to take it game by game.

"These are the chances, those for Dimitar and Adel, that you just have to take.

"Adel's chance, he could maybe have squared it.

"He chose to shoot from a tight angle, and while he hit the target maybe he should have passed.

"If you get your noses in front you make it so much easier.

"The quality into the final third and our finishing, that's an issue."

Sunderland weathered Fulham's early storm before claiming a 2-0 advantage at the break, thanks to goals from Adam Johnson and Ki Sung-yueng.

Steve Sidwell struck back for Fulham after the break, before Johnson fired in twice more to complete an impressive hat-trick.

Sunderland's third goal was the product of a rapid-fire counter-attack, that left Meulensteen praising the visitors' clinical finishing.

Fulham host Norwich in the FA Cup third round replay on Tuesday night, with Meulensteen expecting far more robust defending against the Canaries.

"That was the defining moment when they broke on the counter," he said. "Credit to Sunderland because that's what you look for in an away game.

"The chances they created they took.

"At 3-1 down I still thought we could get back into the game, but it just never happened.

"Our defending needs to improve, it's as simple as that.

"We've got to get out of this cycle of conceding as quickly as we can."