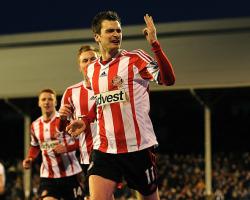 Johnson's first professional hat-trick lifted Sunderland off the foot of the league table as the Black Cats thumped Fulham 4-1 at Craven Cottage.

Uruguayan Poyet said 11-cap Johnson must guide his side to Premier League safety to force his way back into the England reckoning.

"I will help him and I will try to help him to put him there," said Poyet.

"And I will tell you why. If Johnno makes the World Cup we are in the Premier League for sure.

"Normally when you reach 26 there are no more excuses.

"You're experienced enough, but you're not old yet, so you still have the pace and the ability, so that's when you have to be at your best.

"You understand the game better, you have played against everybody everywhere so there is no pressure you can't handle.

"So I hope that his form now will give us a big opportunity to stay up."

Johnson left Manchester City in the summer of 2012 in a bid for regular first-team football.

After a long fight for form, Poyet now believes the 26-year-old is hitting his peak again.

"Johnno today, he would make the difference at any level," said Poyet.

"He's been like that for the last few weeks.

"But certain players need a team to perform one way or play one kind of football.

"We were looking to get that style of play for him to take advantage and make the difference.

"We've been getting close, but we couldn't go on to the next level and today we clicked.

"When someone stands up and performs like Johnno today, then you've got a great chance.

"It's not like you go into any system and just play.

"We were trying, it wasn't easy at first, but in the last two or three weeks when we've been passing better and the team has been more solid, that's given him the freedom to perform.

"He's got the quality to go and make a difference."

Sunderland took a 2-0 lead into half-time thanks to Johnson's free-kick and a deflected finish from South Korean Ki Sung-yueng.

Fulham responded through Steve Sidwell's header, but Ki teed up Johnson's second before the Sunderland-born winger converted a late penalty.

"He didn't score in the cup, then we switched things round, so it's character. I like it," said Poyet.

"You give him options, you try your best to put him in the right positions, but at the end of the day, it's the player.

"I think he's a terrific lad, and you can only imagine how difficult it is when you change teams.

"You come in for a reason from a top team and you want to make a difference, and for whatever reason it doesn't work.

"It's easy to criticise and it's natural, but for the person, the player, it's sad.

"So he was desperate to do something special, and what a day today."

Sunderland's third win in six days carried them above Crystal Palace to 19th in the league standings.

Poyet hopes that moral-boosting shift will allow him to attract a higher calibre of recruit in the January transfer window.

"I've been watching the table every two minutes," he said.

"It's not nice at the bottom, let me tell you.

"It's going to be tense, but at least we are coming from the bottom so we're going the right way.

"If you call me at any stage of my career and you are bottom badly, I would think twice, it's natural.

"But the club, the way we've been playing now, it gives a player an option to make a decision."

Head coach Rene Meulensteen admitted Fulham will not drag themselves out of their relegation fight if they keep leaking goals.

Fulham have now conceded 46 goals in 21 league matches, more than any other side.

"You just can't make progress doing that, not at all," he said.

"We were quite in control early on and then we didn't convert those chances, from (Dimitar) Berbatov and (Adel) Taarabt.

"We gave ourselves a mountain to climb.

"These are the games you need to win; simple.

"Their third goal was the defining moment, and credit to them for that.

"We've got to get conceding those goals out of our system."