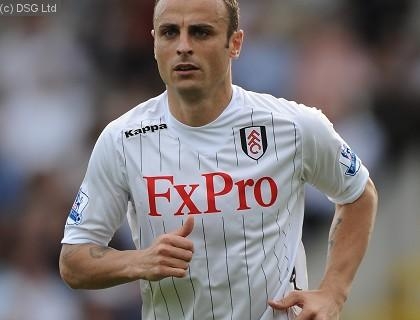 The 31-year-old joined from Manchester United late in the transfer window as he reunited with Martin Jol, who managed Tottenham during the Bulgarian's time at the north London club.

"For Fulham to have a player like him at the club is amazing," Riise told the club's official website, www.fulhamfc.com. "It just proves that we're working hard to push the club forward."

Berbatov rejected the likes of Juventus and Fiorentina to move to Craven Cottage, where he netted his first two goals in the 3-0 defeat of West Brom on Saturday.

Riise added: "He came in and scored two goals on his home debut and you can't ask for more than that.

"He's settling in well and all the boys are pleased to have him in the team. We'll try and make it as easy for him as possible at his new club."

Both of Berbatov's goals came after good work from Alex Kacaniklic, who has been handed the unenviable task of replacing Clint Dempsey on the left wing following his move to Tottenham.

The 21-year-old has impressed in his performances so far and left-back Riise believes the pair can build a decent relationship.

"Last season, I had Clint in front of me and we had a good relationship," the Norway international said. "We're going to miss him but Kaca has come in and we work well together.

"He works hard, he's young and keen to learn. I like having him in front of me because I know he'll do a lot of good things. It looks good for the rest of the season."